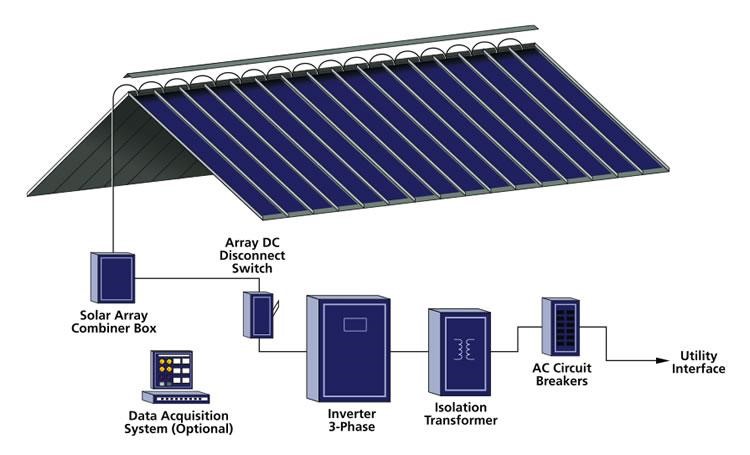 The solar PV Power Plant comprises of the following major components and services. The components, assemblies, sub-assemblies are selected with stringent criterion like long life, highest reliability, minimum maintenance etc. All the systems and sub systems are supported by comprehensive application notes & documentation.

Thin Film Module: A Thin Film solar cell (TFSC), also called a Thin Film photovoltaic cell (TFPC), is a second-generation solar cell that is made by depositing one or more thin layers, or thin film of photovoltaic material on a substrate, such as glass, plastic or metal. Thin film solar cells are commercially used in several technologies, including cadmium telluride (CdTe), Copper Indium Gallium- di-selenide (CIGS), and amorphous and other thin film silicon (a-Si, TF-Si) etc.

Film thickness varies from a few nano-meters (nm) to tens of micro-meters much thinner than thin film’s rival technology, the conventional, first generation crystalline silicon solar cell (c-Si), that uses silicon wafers of up to 200 micro meters. This allows thin film cells to be flexible, lower in weight, and have less drag. It is used in building integrated photovoltaic, and as semi- transparent photovoltaic glazing material that can be laminated onto windows. Other commercial applications use rigid thin film solar panels (sandwiched between two panes of glass) in some of the worlds largest photovoltaic power stations.

A Solar Inverter converts the variable direct current (DC) output of a Solar photovoltaic (PV) panel into a utility frequency alternating current (AC) that can delivered to the load or to be fed into a commercial electrical grid. It is a critical BOS component in a photovoltaic system, allowing the use of ordinary AC powered equipment. Solar inverters have special functions adapted for use with photovoltaic arrays, including maximum power point tracking and anti- islanding protection.

Grid-connected Inverter delivers the solar power to the AC power grid. The PV array is configured so that it operates within a specific range of DC voltages to suit grid connected inverter’s specifications. The inverter will convert the solar DC power to an AC sinewave that matches the AC supply in voltage and frequency to which it is connected. These inverters cannot independently produce a grid equivalent AC sine wave, the inverter must reference the grid to be able to operate. The grid’s voltage and frequency must fall within the predetermined range required to be able to output any power to the grid. They are designed to shut down automatically upon loss of utility supply. They do not provide backup power during utility outages.

Grid connected Inverter- String & Central String inverters are the most commonly used in small grid connected PV systems. String inverters for small grid application will have one Maximum Power Point Tracker (MPPT) and the DC input voltages could vary from ELV right up to 1000 VDC. The MPPT uses electronics so that solar array operates to produce the maximum amount of power possible. It can vary the electrical operating point of the modules to ensure optimum performance, which means maximum output.

A multi string inverter is only one inverter with number of MPPT inputs. Therefore, solar array can be divided into multiple strings. Hence even for Sub- megawatt scale Solar system choice of string inverter provides very good flexibility both technically and commercially. It not only allows ease of installation but also user-friendly operation.

Central Inverters are used for large grid connected solar systems. They provide high total performance based on high efficiency, low auxiliary power consumption, together with verified reliability using proven concepts for maximum uptime. These inverters are available from 100 kW up to 1000 kW and are optimized for multi-megawatt PV power plants.

DC & AC Cables:
DC cables conduct solar electricity from PV array the string junction box and from string junction box to the inverter. They are to carry the required current along with necessary safety margins and also limit the voltage drop (resistance losses). As a general practice, the DC wiring should not cause more than 2% power loss in the system. The DC cables used in solar strings use specialized connectors. These connectors are characterized by their electrical properties, mechanical properties and weather resistance. As these connectors are usually installed outdoors, they should be IP67 rated UV and fire resistant with typical operating temperature.

AC cables carry the AC power of the PV system from the Inverter to the metering point. It is to be selected critically to ensure safety as well as minimize power loss. As a general practice, AC wiring loss of PV system should not exceed 2%.

String combiner box:
The string combiner box also called as Array Junction box (AJB) or PV Generator junction box, combines multiple DC strings in parallel. SJBs should be weather resistant as they are typically installed outdoors. SJBs commonly houses the input overcurrent protection fuse assemblies for several strings, as well as the combined bus of these inputs into a single main output. Combiner box may also house several other components for the site, such as DC disconnect, surge protective devices and in some cases, string monitoring hardware.

AC Distribution Box (ACDB):
ACDB should be placed close to the inverter immediately after the inverter. The primary function of the ACDB is to isolate the PV system (including PV modules and inverter) from the grid. ACDB should also contain Miniature Circuit Breakers to disconnect incoming and outgoing AC connections, Residual Current Circuit Breakers (RCCB) and SPD.

Grounding/ Earth pit & Lightening Arrestor:
The main reason for doing earthing in electrical network is for the safety. When all metallic parts in electrical equipment are grounded then if the insulation inside the equipment fails there are no dangerous voltages present in the equipment case. If the live wire touches the grounded case then the circuit is effectively shorted and fuse will immediately blow. When the fuse is blown the dangerous voltages are away.

A lightening arrestor is a device used on electrical power systems and telecommunication systems to protect the insulation and conductors of the system from damaging effects of lightening. The typical lightening arrestor has a high voltage terminal and a ground terminal.

The solar PV plant monitoring system monitors energy generated per day, week, month & year. Each inverter will be connected via communication cable and string monitors which in turn is finally connected with the Web Box and the data of each inverter shall be monitored via RS485 LAN/ web interface. The major components offered by us in data monitoring system is,

Power monitoring:
A complete data logging system shall be furnished with the solar plant. The system will monitor the plant on line and display the following-

The system shall display all the above parameters in a PC provided in the control room at the plant site, and shall have provision to transmit the data via internet to a remote monitoring system. The system shall be capable of providing performance data, for each inverter.